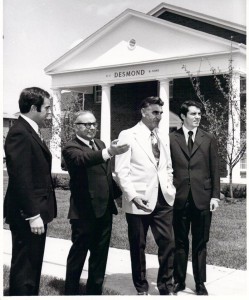 For almost 100 years, A.J. Desmond & Sons have served families with dignity and compassion, providing the highest standard of care during our saddest moments. The roots of A.J. Desmond & Sons go back to 1917 on Woodward Avenue in Highland Park, Michigan. They would operate a funeral home in Highland Park until 1984, but they had begun looking to their future before that.

Albert J. Desmond’s sons Terence and John joined the family business in the 1960s. They decided it was time to look for a location in the growing Oakland County area, explains President Terry Desmond. “We did a thorough study at the Oakland County Planning Department and saw that Farmington Hills and Troy were on the way to rapid development.” They chose Troy because the city wanted to have both a residential and business community.

The Desmonds bought a small 2-acre farm and house on Crooks Road, when the road was two lanes wide, and the only things around were the Somerset Apartments, a gas station at the corner, and one contemporary office building. The Desmonds soon witnessed a lot of changes in Troy.

A.J. Desmond Funeral Home recently added another location on Rochester Road. “It was a pleasant surprise when Susan Price called us and we were able to buy Price Funeral Home. We had been competitors, but friendly competitors, for 40 years. This was something I never thought would happen.”

He was named by the Chamber of Commerce as Troy’s Distinguished Citizen for his community efforts in 1982. He was recently presented the 2015 Alumnus of the Year Award from the Wayne State University School of Mortuary Science. He and his wife Betty have six children, three (Margaret, Kathy and Kevin) of whom are a valuable part of the leadership team at the funeral home, and 17 grandchildren.

A licensed funeral director since 1968, John Desmond has been a leader in funeral service throughout his career. John is a member of the National Funeral Directors Association and an active member of the Michigan Funeral Directors Association, serving as president in 1983-1984 and currently co-chairing their effort to assist Wayne County to bury the unclaimed deceased. John previously served as a member of the State Board of Examiners in Mortuary Science. Currently, John also teaches at Wayne State University in the Mortuary Science program. John lives in Birmingham with his wife Eileen, who works at the Crooks Road location. They have three children and are the very engaged grandparents of three.

“It’s wonderful to work with my family,” Terry says, observing that “you have to be careful to separate family and business. The city has been wonderful to us. Troy is a very special place to do business. It’s the best residential, commercial and volunteer community I know.”

They have other locations, he adds, “but the best out of those really is Troy. Troy is a progressive city; the city government is good and the city services are good.”

Albert Desmond shows the family’s new funeral home on Crooks Road to troy mayor Jules R. Famularo in 1973 as his sons John and Terry Desmond look on. All of the Desmonds are funeral directors.