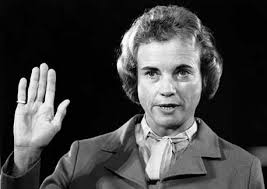 We found two terrific and significant stories for September 25. The first story was about establishing an important communication connection. The second was about breaking a gender barrier. Therefore this second story is included for September 26 even though Justice O’Connor was sworn in the previous day.

On September 25, 1981, was Justice Sandra Day O’Connor’ became the first female Justice of the U.S. Supreme Court. She was nominated by President Ronald Reagan, who had promised to put a woman on the highest bench during his presidency, and she received unanimous approval from the U.S. Senate.

O’Connor was born and raised on a rattle ranch in El Paso, Texas. She earned both a BA in Economics (1950) and her law degree (1952) from Stanford University. Despite her sterling academic record– she graduated 3rd in her law class– she found that the job market for women attorneys was very small and initially worked without pay for the county attorney in San Mateo to gain experience and build her reputation. Within a short time she was retained as the deputy county attorney. During the next 15 years Sandra Day O’Connor’s career included both public service and private practice.

In 1969, Governor Jack Williams of Arizona appointed Sandra to the state senate to fill a vacancy. Subsequently, Ms. O’Connor was successfully elected to serve two additional terms. In 1974, however, she shifted career paths when she was elected as a judge in Maricopa County Superior Court. Four years later, having developed a reputation as a respected judge, she was selected to serve on Arizona’s court of appeals. Only two years later Ronald Reagan nominated her to fill an associate justice seat on the U.S. Supreme Court.

Justice O’Connor was known as a Republican with moderate conservative views. However she voted based on her interpretation of the Constitution, which sometimes deviated from those views. She provided the pivotal vote in Planned Parenthood v. Casey (1992,) which upheld Roe v. Wade. In 1999 she concurred with the majority in Davis v. Monroe County Board of Education. The Court ruled that the Board of Education was responsible for protecting a 5th grader from the unwanted sexual advances of another student. O’Connor is also known for casting the deciding vote in Bush v. Gore in the highly contested 2000 Presidential Election.

Justice O’Connor retired from the bench after 24 years on January 31, 2006. She wished to spend more time caring for her husband John Jay O’Connor who suffered from Alzheimer’s. He passed away in 2009.

Since her retirement, Ms. O’Connor initiated iCivics, an online education program for middle school students. She has authored four books, is an active lecturer and guest speaker, and has voiced her opinion on major legal issues, including healthcare. In 2009 she received the Presidential Medal of Freedom from President Obama.