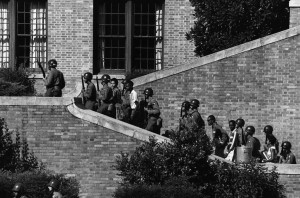 In Brown v. Board of Education (1954), the U.S. Supreme Court had unanimously ruled that racially segregated schools were inherently unequal and therefore unconstitutional. The Court called for desegregation of all schools in the country. The National Association for the Advancement of Colored People (NAACP) immediately began working with southern school districts to register African American students in “all white” schools. However, when nine academically-gifted black students– Ernest Green, Elizabeth Eckford, Jefferson Thomas, Terrence Roberts, Carolla Walls LaNier, Minnijean Brown, Gloria Ray Karlmark, Thelma Mothershed, and Melba Pattillo Beals– arrived at Central High in early September 1957, an angry mob of citizens and the Arkansas National Guard stopped them from entering the building.

NAACP attorneys, including Thurgood Marshall, went to federal court and obtained an injunction to prevent Governor Orval Faubus from blocking the students’ entry. On September 23, the nine teens did enter the building, but were taken home early as angry crowds and the fear of violence intensified. The following day the federal troops secured the site, escorted the teens into the building, and a new era in education began.

There is a local connection to this 365 Story. Troy resident Ward Randol is a member of the Troy Historical Society’s Board of Trustees and a proud nephew of Herbert Brownell.