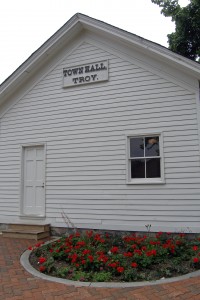 Perhaps you’ve visited the Troy Town Hall at the east end of the Historic Village Green to buy jam at the annual Troy Garden Walk or in the fall for hot cider during a harvest celebration. Most likely it was at the Hanging of the Greens for a visit with Santa, before he moved to the church.

But this little building wasn’t always a town hall. In fact, when it moved to the Troy Historic Village in 1987 there was quite a bit of opinion on what type of building it should become. Some, like the then Troy Historic Commission Chair Bill Price favored making it a church. Some, like Troy Librarian and Museum Director Joe Howey, wanted it to be a general store; others were in favor of a grange, or farmer’s hall. Even a school was suggested, but Poppleton School was already on the Village by 1987.

Our “town hall” had, in fact, started life as Troy Union School at 6060 Atkins, at the corner of Square Lake Road. Built sometime between maps dated 1857 and 1872, where it first appeared, the popular date is about 1867, it apparently remained a school until 1932 when it became a private residence.

The property belonged to Robert and Isabelle Moser. The couple donated the Union School to the City on June 3, 1987, and plans to work on it were quickly underway.

Stepping up to begin the renovation process were the Boy Scouts who were anxious to do the work as part of several Eagle Scout projects, which they did over the coming year. Working with Museum Curator Jan Mecoli Klco, the Scouts removed all the exterior and interior elements, like shingles, which weren’t part of the original structure. In fact, there was even a love letter found in the walls, probably dating from the days when it was a school.

But what would the building become? Several things probably influenced the decision to make the building a town hall. First of all the architects, Smith + Smith, said that to change the building’s size would negate its historical value and cost a lot more than renovations of the original building as it stood. That price was estimated at $26,000.

Plus, there was an oral history of the Livernois area recorded by Morris Wattles where he noted there had been a town hall at Troy Corners, which would be the Livernois and Square Lake area.

Finally, who would pay for the renovation? There were discussions between the Troy Historical Society and Troy City Council on that question, with Council asking to see plans for the renovation before making any decision.

The Society, however, was saving up to build a replica of the general store which had once stood at Troy Corners. In fact, in the not too distant future the Society would give the city $82,000 for that project, money earned over the years at their annual Hand & Eye Craft Show.

Other volunteers would come forward to work on what was now going to be a town hall. There were “Work Bees” every Saturday in 1988. So many volunteers helped with projects that they were given t-shirts that read: “I Raised A Little Hall On The Troy Village Green.”