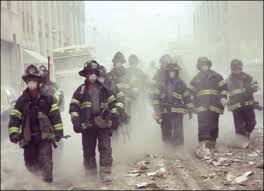 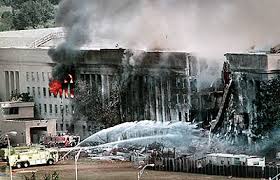 On September 11, 2001, Americans grappled with tragedy. Our nation’s domestic security was violated by suicide attacks on the World Trade Center, the Pentagon, and a thwarted attack, possibly targeted for the White House or U.S. Capitol. Two Boeing 767 aircraft, loaded with fuel and passengers, were hijacked by al-Qaeda terrorists who flew the planes directly into the twin towers of the World Trade Center. The stunned nation watched on television as both buildings collapsed following the fiery collisions. Then another hijacked Boeing jet, United Airlines Flight 77, crashed into the west side of the Pentagon. This attack killed 125 military personnel and civilian workers and 64 airline passengers and crew members.

A fourth plane, United Flight 93, which departed Newark, NJ for California that morning, was also commandeered by terrorists. However, passengers who had heard about the attacks in Manhattan and Washington DC on their cell phones, decided to overpower the hijackers. In a call to his wife, passenger Thomas Burnett said, “I know we’re all going to die. There’s three of us who are going to do something about it. I love you, honey.” The voice of fellow passenger Todd Beamer was then heard, “Are you guys ready? Let’s roll.” The plane crashed at 10:10 am in a field in rural western Pennsylvania. All 45 passengers and crew members died.

In the following days, the death toll of civilians and first responders in New York grew to over 3,000. The dead included more than 400 police officers and firefighters. Between 60,000 and 80,000 people from every state in the country participated in the clean-up. First responders, construction workers, and skilled laborers officially completed their work on May 30, 2002.

Fourteen years later workers and 9/11 survivors who were exposed to the toxic dust and smoke at Ground Zero are experiencing higher rates of asthma, respiratory illness, and cancers. In 2011, the medical journal Lancet published a study based on data gathered from 27,449 first responders. The research indicated that the incidence of asthma among known rescue workers was 27.6%, almost three times higher than the normal rate. Many admitted that they hadn’t worn their respirators during the clean-up because the devices inhibited their work. It was also determined that exposure to asbestos and mercury at Ground Zero contributed to over 1,000 deaths within ten years.

On January 2, 2011 President Obama signed into law the James Zadroga 9/11 Health and Compensation Act. This legislation was named for the first firefighter to die from respiratory disease directly related to exposure to dust and airborne toxins during his 450 hours of service at Ground Zero. The Act provided $4.2 billion for a World Trade Center Health Program Fund to test and treat rescue and recovery workers and 9/11 survivors. Senator Bob Menendez and Congresswoman Carolyn Maloney who sponsored the bill worked nine years with a coalition to see the legislation passed. In 2015 Maloney sponsored reauthorization legislation to extend funding for the program indefinitely. HR 1786 was referred to the Subcommittee on the Constitution and Civil Justice on May 15, 2015.

Devastation at the Pentagon