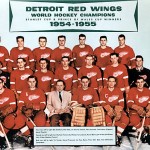 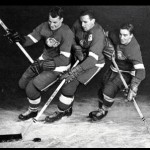 The Red Wings open their 2015-2016 regular season today, with a new coach and renewed energy. If you are among the many Troy residents who are ardent Red Wings fans, you may know many of the following facts in this highly abridged Red Wings history but, unless you are a walking encyclopedia, we think that you will find some surprises here.

The story of the Detroit Red Wings began in 1926, when a Detroit ownership was granted a NHL franchise and purchased the Victoria Cougars, formerly of British Columbia, Canada in the recently disbanded Western Hockey League. The Detroit Cougars initially played home games in Windsor, Ontario.

In 1927-28 the team hired Jack Adams as coach and general manager. He would hold those positions until the 1962-63 season. The team also moved into the new Olympia Stadium, which would be their home for more than 50 years.

In 1932, James Norris Sr., a millionaire, purchased the team. He brought an association with the Winged Wheelers, for whom he had played amateur hockey in Canada. He and Adams changed the team’s logo to the winged wheel and the team became known as the Red Wings.

In 1943, the first season of the Original Six team NHL the Wings finished first overall and won the team’s third Cup. That season began the “Golden Age” of the NHL, which lasted through the 1966-67 season, when the league doubled to 12 teams.

From 1948-49 until 1954-55, the team placed first overall seven times and won four Stanley Cups (1950, 1952, 1954 and 1955). Players including Ted Lindsay, Gordie Howe, Red Kelly, Terry Sawchuk, Sid Abel and Jack Stewart had developed the foundation for one of the greatest dynasties in NHL history.

The 1950 season brought the first appearance of an octopus on Detroit ice at a hockey game. The eight tentacles represented the eight games that a team needed to win to capture the Stanley Cup at that time.

Detroit returned to the Stanley Cup finals in 1961. They lost in the finals in 1961, and in 1963-66. But then Detroit would wait 31 years before the team played in another Cup final.

In December 1979, the Wings moved to Joe Louis Arena.

In 1982 the Norris family sold the Red Wings to Mike and Marian Ilitch, the owners of Little Caesars Pizza. They installed Jimmy Devellano as the team’s general manager, and he selected 18 year-old Steve Yzerman with the fourth pick of the 1983 Draft.

Detroit hired Jacques Demers as their new coach. The Wings made the playoffs in each of his first two seasons,  advancing to the Conference Finals each season, before losing five-game series to the Edmonton Oilers both times.

In 1991-1992 Scotty Bowman was hired as coach and the winning team of Devellano, Ken Holland and Bowman was established. We will remember some of the high points, and the low points, of the Wings’ ensuing seasons in tomorrow’s posting.