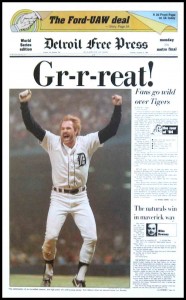 Ward Randol is a Troy resident, an active Villager, and a lifelong Detroit Tigers fan.  His memories of Tiger games in the 1984 World Series are highlighted in this 365 Story.

The population of the young City of Troy was around 35,000 in 1968 when the Detroit Tigers won their 3rd World Championship of baseball.  It had nearly doubled 16 years later when Major League baseball began its 1984 season.  Matching 1968’s start, the 1984 Tigers won nine of their first ten games and settled comfortably into first place.  Then they continued to win at an all-time record pace.  By game 40 near the end of May they had amassed 35 wins and roared on to break the 1968 team record for wins in a season, with 104 victories in 162 games played.  They finished an astonishing 15 games ahead of the second-place team in their American League division, the Toronto Blue Jays.

In 1984 the American League had only two Divisions, the East and the West each with 7 teams and the Tigers had won the East.  The Kansas City Royals won the West (déjà vu?).  At that time each of the Major Leagues had one playoff series (East vs. West) before the World Series, and it took only 3 playoff wins for the League pennant.  The 1984 Tigers made short work of the 1984 Royals, beating them 3 straight games.  As in 1968 the 1984 Tigers’ starting pitchers were dominant: 19-game winner Jack Morris, Dan Petry and Milt Wilcox started the 3 games and pitched the first 7, 7 and 8 innings, respectively.  The 1984 Tigers, however, also had two stellar relief pitchers to back up the starters: American League 1984 Cy Young and MVP awards winner Willie Hernandez, and one of my all-time favorite Tigers, Aurelio Lopez – Senor Smoke – the winning pitcher in both game 2 of the playoff and the fifth and final game of the World Series following his 10 – 1 regular season won-lost record.

My ticket applications for 1984’s home playoff and World Series tickets were all unsuccessful, so I watched the games on TV in the comfort of my home.  The National League’s Series entry was the San Diego Padres.  Once again the N. L. had the home field advantage.  Also as in 1968 the Tigers gained a split of the first two games in the N. L. ballpark, with Morris pitching a complete game and winning the first 3 – 2, and Petry suffering the 5 – 3 loss in the second.  Then the Tigers came home for the next 3 games and swept the Padres to take the club’s 4th World Championship: 5 – 2 in game 3 (WP Wilcox), 4 – 2 in game 4 (another complete game for WP Morris), and a resounding 8 – 4 in game 5 (WP Lopez).  In game 3 the Tigers received 11 walks from Padres pitchers, a Series record.  The hitting star of game 4 was shortstop and Series MVP Alan Trammell who drove in all 4 Tigers’ runs with a pair of 2-run homers.  Game 5 featured right fielder, playoff MVP and Michigan native (Pontiac) Kirk Gibson’s mammoth 3-run upper deck home run in the 8th inning to complete his driving in 5 runs in the game.  Other heavy hitters for the Tigers were second baseman Lou Whitaker, catcher Lance Parrish, center fielder Chet Lemon, and left fielder Larry Herndon.  Tigers’ managerial genius Sparky Anderson became the first to manage both an A. L. team (the 1984 Tigers) and a N. L. team (the 1975 & 1976 Cincinnati Reds) to a World Series title.  Strangely, Sparky is the only member of the truly outstanding 1984 Tigers to be elected to the Baseball Hall of Fame so far.