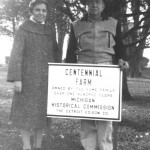 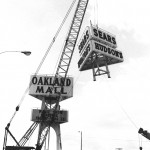 The October 17, 1968 issue of the Daily Tribune included a special section announcing Troy’s new Oakland Mall. The regional shopping center followed the model established by Northland and Eastland– two major department stores or anchors surrounded by smaller specialty shops all under one roof. What made the new mall especially attractive was its location immediately adjacent to the 14 Mile Road exit off the brand new I-75.

Originally Oakland Mall included a four-story J.L. Hudson’s, a two- story Sears and Roebuck, and 62 smaller shops. A Wrigley Supermarket was also in the mall. It had conveyor belts which transported shoppers’ grocery bags to a convenient “package pick-up” center.

The mall’s center court featured a domed ceiling, a fountain, and landscaping from Florida.  The entire complex, built on a centennial farm site previously owned by Robert and Mary Mageehan, was surrounded by 60 acres asphalt where 8,000 cars could be parked.

Oakland Mall was expanded in 1979. The new wing featured 52 additional stores and restaurants and a third anchor store, J.C. Penney. A five-theater complex, known as The Movies, was also constructed.