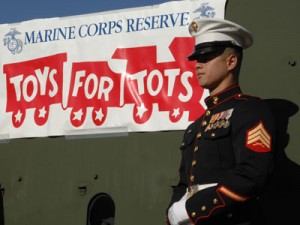 The Holiday Season is a time for giving. Salvation Army bell-ringers with their kettles have solicited donations for the poor since 1891. The tradition was started by Captain Joseph McFee, a Salvation Army officer in in San Francisco, who wanted to provide a free Christmas dinner to those in need.

Toys for Tots is a 20th century tradition begun 1947 by Major Bill Hendricks, a United States Marine Corps Reservist in Los Angeles, California. Bill’s wife, Diane had made a Raggedy Ann doll and asked him to donate it to an organization that would give it to a child at Christmas. When Bill determined that no such agency existed, they agreed that he should start one. That year Toys for Tots distributed 5,000 toys to children in need.

In addition to serving as a Reservist, Bill was the director of public relations for Warner Brothers Studio. So he used his extensive Hollywood network to solicit celebrity support for Toys for Tots. In 1948, Walt Disney designed the red train logo, which the organization still uses today. Disney also designed the first Toys for Tots poster.

In 1995, the Secretary of Defense approved Toys for Tots as an official activity of the U. S. Marine Corps and an official mission of the Marine Corps Reserve. During the last sixty years Toys for Tots has expanded to all 50 states and has distributed over 494 million toys to over 230 million children. Rebecca Perelli Yarbrough, a Regional LCO Coordinator in Oakland and Northwest Wayne Counties is one of thousands of volunteers who donate their time to the program. “I love this organization because everything goes to the kids,” she says proudly. “Toys for Tots is known as one of the most efficient nonprofits in the country with 97 cents of every dollar donated going directly to support the children. Only 3 cents goes to administration.”

Marines with the Toys for Tots Banner