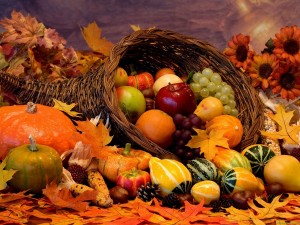 The English colonists who arrived in the New World in September, 1620 were ill-prepared for survival. Their food supplies were inadequate and they had no time to build proper shelters before winter. Many remained aboard the Mayflower through that first winter where they suffered from exposure, disease, and scurvy. Half died before spring. In March the survivors who went ashore met members of the Abenaki and Pawtuxet tribes who showed them how to find food, fish, and plant corn.

When the survivors harvested their first corn crop in 1621, they gave thanks and celebrated for three days. Local natives shared in their feast, which included venison, “fowl” (it is unlikely that this actually included turkey), and corn. Potatoes and pumpkin were not on the menu in 1621.

In subsequent years harvest and thanksgiving celebrations continued. Historic records indicate that Presidents Washington, Adams, and Madison each designated days for giving thanks while they were in office.  The State of New York established Thanksgiving as an annual holiday in 1817 but other states, including those in the South, did not embrace the tradition. It was not until 1863, in the midst of the Civil War, that President Abraham Lincoln proclaimed the final Thursday in November as Thanksgiving. He also requested that Americans pray and ask God to “commend to his tender care all those who have become widows, orphans, mourners or sufferers in the lamentable civil strife” and to “heal the wounds of the nation.”

Over time, the celebration of Thanksgiving shifted from a day of gratitude to the official kick-off of the holiday season. In 1939, during the Great Depression, President Franklin D. Roosevelt moved Thanksgiving to the third Thursday in November in an effort to stimulate the economy by providing an extra week for Christmas shopping. He was criticized for this action and signed a second bill in 1941 moving the official holiday back to the last Thursday of the month.  More recently retailers have focused attention on Black Friday sales that start before Thanksgiving dinners are eaten.