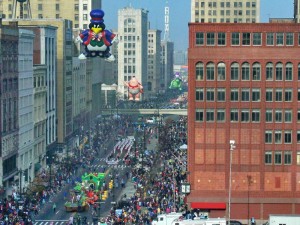 Who doesn’t love a parade on a holiday, but when did we begin to have them?  In 1789 George Washington may have announced Thanksgiving as a national holiday, but it wasn’t given a set date until 1863 when President Lincoln declared the celebration be held on the last Thursday in November.  This date changed once more in 1939, when President Franklin Roosevelt pushed it up a week to give retailers more time for pre-Christmas shopping.  It is no surprise, then, that department stores were responsible for the annual parade on Thanksgiving Day.

In 1920 Gimbels Department Store in Philadelphia started the tradition.  In 1924 both Macy’s in New York and J.L. Hudson in Detroit launched their respective parades.   Marching bands, floats, and rubber balloons were seen in all of them.  The Macy Parade shut down for three years during WWII, donating the rubber balloons to the war effort.  The Hudson parade was also suspended in 1943-44 due to material shortages, but resumed as of 1945.

Detroit’s parade in the 1920s featured amazing paper maché heads thanks to Charles Wendel, who was the display window director for Hudson’s.   He had seen them during a European trip and collaborated with some Italian puppeteers to construct them.  They are fondly called the “Big Heads” and have become a staple of the parade in Detroit.

Broadcasting of the Detroit parade began in 1931 on WWJ radio.  With television becoming a main source of communication, the parade was televised beginning in 1959 on WWJ-TV and WXYZ-TV, with ventriloquist/puppeteer Shari Lewis as the emcee. In 1960, portions of Hudson’s, Macy, and Gimbel parades were broadcast on CBS as part of the All American Thanksgiving Day Parades.  Hudson’s continued to sponsor the parade in Detroit until 1979, when it was turned over to the Detroit Renaissance Foundation due to rising costs.  In 1982 it changed hands once more to the newly created Michigan Thanksgiving Parade Foundation. The Parade Company division was created in 1990 to oversee marketing and operations.  Also during the 1980s WDIV broadcast the event rather than WXYZ.  Currently, the Parade is televised on other stations in Michigan and across the U.S., as well as through internet television.  Coverage prior to the parade includes interviews by local TV personalities, musical acts, and celebrity performers.  The Parade ends with the arrival of Santa Claus who receives the key to the City of Detroit from the Mayor.

Detroit does own one piece of Thanksgiving Day history: the Lions have played in more Turkey Day football games than any other NFL team. Detroit started the tradition in 1934 and has played on Thanksgiving Day every year since, except when the league went on hiatus during World War II. (The Lions lost that first Thanksgiving game to the Chicago Bears by a score of 19-16.).