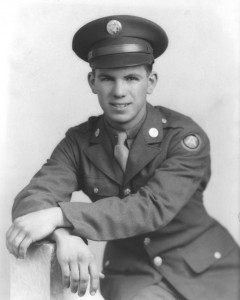 Sherwood Shaver, his two brothers and his seven sisters grew up on Pansy Street in Troy Township. Sherwood graduated from Big Beaver High School and attended the Pontiac Business Institute before enlisting in the US Army on December 3, 1942. Assigned to the 153rd Field Artillery Battalion during World War II, he saw combat in Normandy, Northern France, and in Germany, where he was wounded and lost his left hand. For his military service, Shaver was awarded the Purple Heart, the Good Conduct Medal, the European-African-Middle Eastern Campaign Medal with three bronze stars, and World War II Victory Medal.

When he returned to Troy, Sherwood, also known as “Woody,” married Arline DeLoy. They had two children. He worked as Troy’s Postmaster from1945 to 1979 and served as the national chairman for the Postmasters Association’s commission for equal employment opportunities for the handicapped. Shaver also became a member of the American Legion and a life member of Disabled American Veterans.

In addition to his professional and civic service, Sherwood was a member of numerous community organizations including Troy Rotary, Troy Exchange Club, Troy Metropolitan Club, Friends of the Troy Public Library, and the Emerald Lakes Homeowners Association. He was also an active member of the Boy Scouts for 28 years.

For his outstanding service Sherwood Shaver was recognized as Troy’s Distinguished Citizen in 1975. He received numerous other awards including the Exchange Club’s “Book of Golden Deeds” and the Paul Harris Fellowship Award from the Troy Rotary in 1985.

Troy: A City from the Corners, Loraine Campbell Editor, 2004