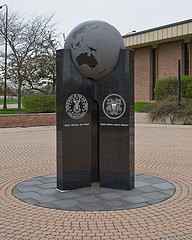 The tradition of placing flowers on the graves of deceased soldiers originated long ago but gained special significance in the Unites States following the Civil War. The Grand Army of the Republic (GAR) designated May 30 as Decoration Day and encouraged citizens to place early spring blossoms on the graves of Union and Confederate soldiers.

One of the first Decoration Day observances was held in 1868 at Arlington National Cemetery. The veranda to the Arlington mansion, once the home of General Robert E. Lee, was draped in black. Dignitaries including General Ulysses S. Grant spoke and orphans with members of the GAR sang hymns, recited prayers, and placed flowers on the graves of both Union and Confederate soldiers. However, approximately twenty-five other northern and southern cities claimed to have originated Decoration Day in 1866. In 1966, Congress and President Johnson declared Waterloo, New York, the “birthplace” of Memorial Day because on May 5, 1866 the community initiated a formal, community-wide, annual observance.

Memorial Day ceremonies on May 30 were commonplace across the country by 1900. Following World War I, the observances were expanded to honor those who have died in all American wars. On June 28, 1968, the Uniform Monday Holiday Act was signed.This legislation officially designated Memorial Day as a national holiday, and moved the observance to the last Monday in May. The legislation also shifted observances for Washington’s Birthday, Columbus Day, and Veterans Day to fixed Mondays to increase the number of three-day holidays. Another congressional act approved in 1975 and implemented in 1978 moved Veterans Day back to November 11.