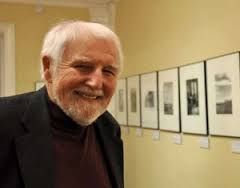 Balthazar Korab was born in Budapest, Hungary in 1926. At the age of 19 he entered the Polytechnicum in that city to study architecture. However, he fled his native country in 1949 because of the rise of communism. Korab moved to Paris where he continued his studies and received a degree in architecture from the Ecole des Beaux-Arts in 1954. He also spent a short time as a draftsman for Charles-Édouard Jeanneret-Gris, better known as Le Corbusier. This architect, designer, painter, and urban planner pioneered what is now called modern architecture.

Korab immigrated to the United States in 1955 and was hired by Eero Saarinen, the noted American architect based in Bloomfield Hills. While working with Saarinen, Balthazar began to use photography in his design process, and slowly transitioned from designing buildings to photographing architecture. In 1964 he received the prestigious AIA Medal for Architectural Photography. Korab was now a full-time photographer and, over time, gained global recognition for his artistry in capturing the human built environment. Included in Korab’s body of work are images of the high rise buildings in Troy, especially along Big Beaver, and photographs of the buildings and sculptures at Cranbrook.

In 1994 President Bill Clinton presented President Arpad Goncz of Hungary a portfolio of Balthazar Korab’s photographs. Korab’s work is held in many collections and archived in the Library of Congress.

This renowned photographer and architect who lived in Troy passed away in 2013 at the age of 83. He is survived by his wife Monica and son Christian.