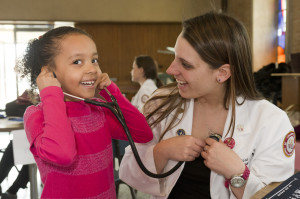 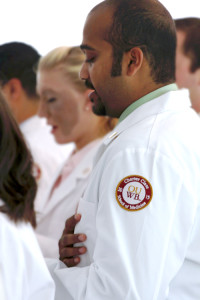 They both lived in Troy and had numerous mutual friends, but they went to different high schools and never met. They interviewed for admission to the first class of Oakland University William Beaumont School of Medicine on the same day. And, on May 15, 2015, Melissa Bayci and Sivateja Mandava proudly accepted their Doctor of Medicine degrees at the school’s first graduation ceremony, along with 45 other members of OUWB’s Charter Class. Although they will always share this bond, after graduation, their paths will separate quickly.

Dr. Mandava plans to leave on May 16 for Washington, D.C., where he will pursue a three-year Internal Medicine residency at George Washington University. Dr. Bayci will spend the next four years as a resident in Obstetrics/Gynecology at William Beaumont Health. Their paths to becoming physicians, while, in some ways, very different, share important similarities: both have known for a long time that they wanted to become physicians; both had a critical experience that fueled their resolve; and both feel well-prepared by their time at OUWB to move on to the next step in their medical careers.

Dr. Mandava, the son of Aruna and Prasad Mandava of Troy, was born in India and moved to the United States permanently when he was old enough to enter public school. His mother says that he always wanted to be a physician. After he graduated from Troy High School, he made a summer visit to India. He said “One day when I was on the street, I saw a man who had been very badly injured in an accident. I was an EMT, but he was hurt so badly that I couldn’t help him. I knew that, if I were a doctor, I could help.” Dr. Mandava continued to volunteer as an EMT while earning his Bachelor of Science in biomedical engineering from Johns Hopkins University. Since he had taken a year to do additional research, he was ready to apply for entrance to medical school at the time that OUWB was interviewing for admission to the Charter Class.

Dr. Bayci, the daughter of Angeline and Ivan Bayci, grew up in Troy. She, too, knew from a young age that she wanted to be a physician. She was always interested in science, then, between elementary and middle school, she had relatives who were hospitalized with serious illnesses and she was sad and frustrated that she couldn’t help them. “Then I realized that becoming a doctor was a way I could help,” she said. Dr. Bayci graduated from Troy Athens High School. A four-year varsity swimmer and water polo player, she worked as a lifeguard at the Community Center pool and the Troy Family Aquatic Center.  She attended Kalamazoo College and graduated with a Bachelor of Arts in Biology, and a minor in Spanish.

Both are excited to be graduates of OUWB and members of the Charter Class. Said Dr. Bayci, “I really liked that OUWB was cutting edge, with the integrated curriculum and the Capstone projects. Since we were the first class, it was fun that the students, faculty, and staff were all learning and building the school together.” Dr. Mandava said, “I appreciated the school’s vision for developing compassionate physicians, and the mentors, Dr. David Thomas, and others, who kept that vision foremost in our minds.”

May 15, 2015 marked an historic event for two distinguished institutions, Beaumont Health and Oakland University. It was also a day of pride and celebration for two Troy families, the Baycis and the Mandavas, and the long-anticipated beginning of careers in medicine for two Charter Class graduates and new physicians – Dr. Melissa Bayci and Dr. Sivateja Mandava – congratulations to all!

Melissa Bayci volunteers at a health fair, while a student at OUWB.

Sivateja Mandava recites the Declaration of Geneva, the physician’s oath.