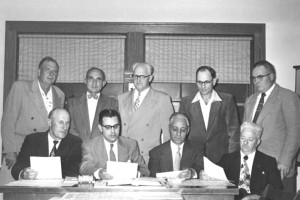 Nine men were elected on June 7, 1955 to serve on the Charter Commission. Township Supervisor Norman Barnard received the most votes and was selected as Chairman of the Commission. Five other Township Board members were elected, along with Frank Costello, President of the School Board, and Ernest Gray, Chairman of the Citizens for Incorporation Committee. Roy Duncan, a lone Democrat, was the ninth member. He stressed the non-partisan emphasis of the Commission.

Norman Barnard contacted Vickers, Inc. following the election and suggested the two parties negotiate a settlement and that the company remain a part of Troy. On July 5, 1955, Vickers, Inc. discontinued its suit in Oakland County Circuit Court.

The Charter Commission met during the summer to draft the charter that provided for a seven-member commission elected for three-year terms on a non-partisan basis. The commission appointed a mayor and necessary administrative officials. A Justice of the Peace and associate justice were elected to office. The Charter Commission scheduled a public hearing on August 15, 1955. Chairman Barnard stated to the press, “It is the purpose of the Charter Commission to have every citizen who must live and be governed under this charter to have an opportunity to approve or disapprove the matters contained therein.”