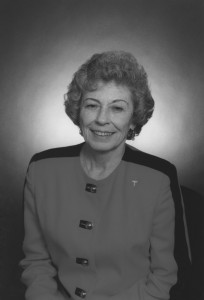 Jeanne Stine is one of Troy’s most distinguished and respected leaders. A former teacher and school counselor in Clawson, she became a fixture in Troy government for 30 years. Jeanne was elected to Troy City Council 1976 and served as mayor from 1992 to 2001. Term limits prevented her from running for mayor again. She returned to City Council  in April 2002 and served until November 2007.

Jeanne Stine loved the work and the challenges local governance. “She embraced the job whole-heartedly,” wrote Annette Kingsbury in 2001, “speaking to any group that would ask, writing a poem for every retiring city employee, performing marriages, and, mixing high heels and hard hats, turning a shovel to break ground on every new project.”1

Jeanne’s passion for community service did not diminish when she retired from elected office. She remains an active volunteer in the Troy Firefighter’s Women’s Auxiliary and vocal advocate for the Troy Public Library. She works on elections, makes soup for church luncheons, and sends dozens of birthday greetings and get well wishes to friends and acquaintances.

Jeanne credits her parents for instilling in her a strong sense of community. She thanks her husband Jack for encouraging her to run for office. And she is grateful for the adventures public service has provided. “I just feel really, really fortunate when I look around the state and I think that I have had the opportunity to serve Troy.,” she said, “because I sincerely believe it’s a very special community.”2