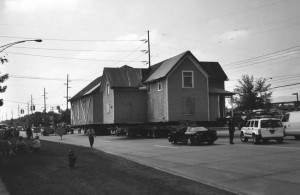 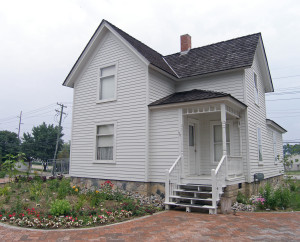 A small Methodist congregation was established in the Troy Corners area (at the intersection of Square Lake Road and Livernois) in 1823 under the spiritual guidance of Elder Warren. They met first in log homes, then worshiped in a log schoolhouse on Square Lake Road, and in 1862 purchased the Episcopal Church at Troy Corners for $350.

By 1871 the congregation had sixty members and a committee was formed to build a home for the minister that served the Methodist congregations at both Troy Corners and Big Beaver (at the intersection of Big Beaver and Rochester Roads). For the very first time a church committee included three women, Sister L. Harris, Sister Wattles and Martha Waldron. Land for the parsonage was deeded to the Church by Rhobie Niles for $1, following the tradition of her grandfather, pioneer Johnson Niles, who in 1837 had deeded the property for the Episcopal Church for the same sum.

The home that was constructed under the watchful eyes of the women was a typical two story farmhouse with a cruciform floorplan and a corner entry. Between 1876 and 1964, twenty-six different ministers and their families lived in the house. From 1903 until 1964 the congregations at Big Beaver Methodist and at Troy Corners again shared a minister and ownership of the parsonage.

In 1956 the Troy Corners congregation purchased a new church site and began raising funds to build a larger house of worship and a modern parsonage. They paid the Big Beaver church members half of the market value of the Troy Corners parsonage and then sold it and the Troy Corners church to antiques dealers in 1963. Mr. and Mrs. Pettypiece transformed the church into a popular shop and used the parsonage as their residence or a rental property.

In 1997 the Troy Historical Society and the City of Troy purchased the church and parsonage. Plans to relocate the buildings to the Troy Historic Village were challenged by area residents who wished to see the historic structures restored on their original foundations. In 2002 the controversy was finally resolved and the church and parsonage were moved on August 20, 2003. Restorations were completed in ten months and the buildings were opened to the public on June 27, 2004.

Today the church and parsonage stand side by side, as they always have and the interior of the parsonage has been furnished as it might have looked in 1910. It is a warm and welcoming home, reflecting the care and values of the women who were responsible for its construction. They would be pleased to know that when weddings are held in the church, the bride and her attendants gather in the parsonage before they walk down the aisle.