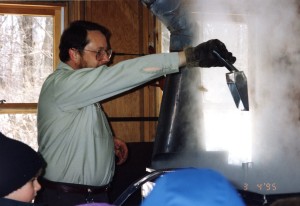 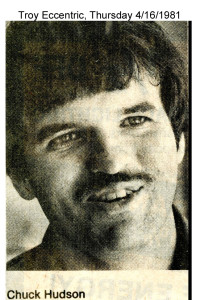 The Rouge River trickles through a Beech-Maple forest and soggy wetlands in the northwest corner of Troy. Norman Barnard’s oldest son Fred and others who grew up in Troy Township and played in this area called it the “hundred acre woods.”

In 1970 the City of Troy purchased 70 acres of the undeveloped land from Harold Coughland for a park. Three years later the City bought another 5.45 acres that included a farm house, two barns and outbuildings seen from South Blvd. Then in 1975 an additional 23.45 acres owned by Dr. Han were purchased to complete the park now known as the Lloyd Stage Nature Center.

The natural area was named to honor Lloyd A. Stage, a respected chairman of the Troy Parks and Recreation Board. Mr. Stage was also very active in other community organizations having served as a charter member and volunteer firefighter at Station 3, a member of the Troy Board of Education, and a Troy Goodfellow.

The original trails and family programs at the nature center were planned by naturalist Chuck Hudson. Sadly, Hudson died in a car accident in April 1981 at age 32. He was succeeded by Chuck Barnes, a wildlife biologist and experienced environmental educator. During the next 25 years Chuck and a small staff maintained the center and developed many programs. Thousands of visitors enjoyed these events. Others simply enjoyed hiking the trails. A new nature center building was constructed in 2002.

In 2011 the Troy Nature Society, a nonprofit organization assumed management of the Stage Nature Center. Their staff and volunteers continue to offer education programs for thousands of children through school fieldtrips and the popular Junior Naturalists Club. Visitors of all ages also enjoy many seasonal events.

This month the Troy Nature Society is holding the annual Maple Syrup Festival. Staff from the Troy Historical Society will assist with programs and sell maple products. Naturalist Debbie Williams reports that the sap has started to run this week and encourages all to celebrate this first sign of spring on March 14 and 21! Go to https://troynaturesociety.org/index.php/en/to sign up for Maple Syrup Time- Past and Present and to learn more about other upcoming events.

Visitors learn about tapping trees during the pioneer era