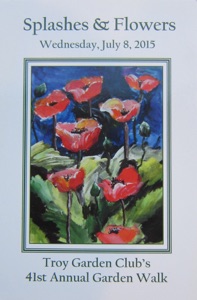 The Troy Garden Club, Michigan Division of the Woman’s National Farm and Garden Association, is a 501(c)(3) non- profit  whose donations in 2015 support the horticultural programs and educational aspirations of over 30 organizations and individuals. Membership is currently 110 members.

The Troy Garden Club began in 1971 as a “special” interest group of the Troy Newcomers Club. In 1974 the garden club chose to separate from the Newcomers. Judy Cornellier, the only remaining founding member, explained that one could belong to the Newcomers for only three years. Also remaining part of the Newcomers restricted the membership to only Newcomers. Gaining independence allowed the Troy Garden Club to be open to anyone and also not be confined to Troy residents. Judy was quoted in a June 8, 1974 Royal Oak Tribune article by Susan E. Snyder, “We are interested in attracting members who are interested in growing plants and sharing each other’s knowledge.”

Currently, one hour presentations are offered at the monthly meetings and are open to the public for a small fee. The club also had an annual flower show and all members were required to enter. According to Judy that guaranteed “about 80% participation.” The shows were a learning experience and not meant to be seriously competitive. Some shows were held at an Oakland Mall community room. Because most members had young children, a baby- sitting service was provided. The club initially had 34 members and has never been restricted to women. Over the years the club met at members’ homes, Old City Hall, the Historic Village and churches. In January, 1982 the Troy Garden Club joined the Woman’s National Farm & Garden Association, an organization currently celebrating its 101 year anniversary.

Civic service has been a part of the Troy Garden Club’s purpose. One of the earliest gardening projects began at the Troy Public Library in 1973. Members donated the plants for two small plots at the library entrance and maintained the beds. Gardens have been sustained at the Lloyd Stage Nature Center and Troy Historic Village. The Troy Garden Walk is the club’s principal annual fundraiser. The first garden walk was held June 12, 1974. The event now attracts almost 1,000 ticket holders. “Splashes & Flowers,” the 41st annual walk will be July 8th this year. Information about the club is available at www.TroyGardenClubMI.com.