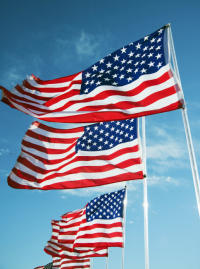 On June 14, 1777, John Adams spoke at a meeting of the Continental Congress in Philadelphia. He said, “Resolved, that the flag of the thirteen United States shall be thirteen stripes, alternate red and white; that the Union be thirteen stars, white on a blue field, representing a new constellation.” The resolution was approved by the members and the “stars and stripes” became an official symbol of our new nation.

After the Civil War, teachers began commemorating June 14 with their students. Some records suggest that in 1885. BJ Cigrand, a schoolteacher, in Fredonia, Wisconsin observed the 108th anniversary of Adam’s resolution, calling it “Flag Birthday.” Over time Cigrand gained a reputation as an advocate the observance of June 14 as ‘Flag Birthday’, or ‘Flag Day’.

After 30 years of unofficial state and local celebrations, President Woodrow Wilson officially established Flag Day by proclamation in 1916. Flag Day became a national observance by an Act of Congress in 1949 and was signed into law by President Harry Truman.

There have been twenty-seven official versions of the US flag as states were added to the Union. The current version dates to July 4, 1960, when Hawaii became the 50th state.