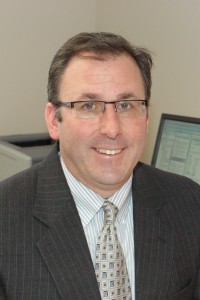 The personal philosophy and work ethic of City Manager Brian Kischnick reflect many lessons he learned growing up in Saginaw Michigan. While he resided with his mom following his parent’s divorce, he gained important insights from both parents. “My mom was always helping people and she was always there for me. I started playing hockey when I was four and she drove everywhere to play hockey.” Brian continued to play and eventually was the captain of his high school team. Today he attends his son’s hockey games. “Hockey is a big deal in our family,” he says with a smile. “Even my wife Kari coaches hockey.”

His father’s business, a machine shop with 100 employees, flourished and faltered with changes in the auto industry. “I learned how the economy affected jobs as I watched my dad work even harder when times were tough so that his employees could keep their jobs.” As a teen, Brian worked in the shop each summer and learned quickly that he wanted a different profession. “I learned to spin chips,” he explained. “I scooped fine metal shavings into a spinning drum that extracted cutting oil from the chips so that the oil could be reused. You got chips in your hair, on your clothes– everywhere. I hated it.”

But as junior, Brian found direction when he was introduced to Saginaw’s City Manager, Tom Dalton. “He knew every corner of the city, and sometimes I drove around with him when he looked at properties scheduled for development or rezoning. One time we went to the Civic Center and he had a key to the back door. We went up on the catwalk to watch a hockey game. I decided right then, that this was the job for me.”

When he accepted the position as City Manager of Vassar Michigan, Brian wrote an elaborate plan of changes and improvements he would implement. “I showed it to Largo Florida’s senior City Attorney. He told me to take the plan back to my office and never show it to another living soul. Then he told me to just listen for the first six months on the job. Only then should I act after seeking the counsel of others.”

Brian has drawn on these and other life lessons as Troy’s City Manager since 2012. “I love this job and this city. I’ve lived and worked in a lot of places and every town claims to have the best schools and be the best place to live. The difference in Troy is, it’s true.”