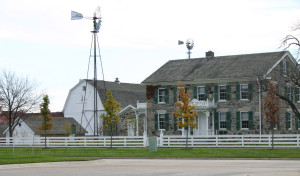 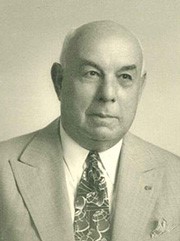 As you drive along Big Beaver Road, the handsome field-stone farmhouse, barn and windmill, tucked in among the office buildings, seem like a glimpse of Troy’s farming past that somehow live on in the busy city. The farmhouse, which was built in 1852, is listed on the National Register of Historic Places, but it is not a monument or a museum. The house and barn, and a LEED-platinum connected building constructed in 2006 to expand the organization’s space, are the home of The Kresge Foundation. One of the nation’s largest foundations, in 2014 Kresge paid out $138.1 million in grants and made program-related investments totaling $20.4 million. And, as you can see, when you drive along Big Beaver today, the foundation continues to expand through a new construction project that will be complete this fall.
The foundation was established in 1924 by Sebastian S. Kresge, the retail millionaire, to celebrate the 25th anniversary of the founding of his S.S. Kresge Company. And today, we celebrate the 149th anniversary of Sebastian Kresge’s birth.
Kresge was born in Pennsylvania on July 31, 1867. He was raised on a farm and went to work after completing high school. While working a variety of jobs, he studied at the Eastman Business College graduating in 1889. Following graduation, he clerked in a hardware store, then worked as a traveling salesman.
Kresge saved his money and invested in a chain of retail stores owned by J.G. McCrory. After this partnership proved successful, Kresge sold his holdings to open his own five and dime retail business, the S.S. Kresge Company, in Detroit, in 1899. By 1924, Kresge was worth approximately $375 million (which translates to more than $5 billion in today’s dollars). Many years later the enterprise became known as the Kmart Corporation whose headquarters would also become a Troy landmark.
Sebastian Kresge established his foundation with an initial gift of $1.6 million, to “promote human progress.” He served as the foundation’s treasurer for 42 years, until his death at age 99. During his lifetime, he contributed $60.5 million to the foundation.
For decades, the foundation made gifts that helped to build capital projects such as libraries, hospitals, schools, museums and community centers. These gifts were awarded as challenge grants, which an organization would collect after reaching the fundraising goal that would enable it to complete the project.
Today, the foundation partners with non-profit, public and private sector organizations committed to the needs of low-income individuals. The foundation makes project and operating grants in the areas of Arts and Culture, Community Development in Detroit, Education, Environment, Health, and Human Services. One of these grants helps to support programs at the Troy Historic Village. Sebastian Kresge’s granddaughter, Cynthia L. Kresge, carries on the family tradition of involvement as a current member of the foundation’s board.
Photos:
Sebastian S. Kresge
Kresge Foundation on Big Beaver Road
https://kresge.org/about-us/annual-report
https://detroithistorical.org/learn/encyclopedia-of-detroit/kresge-sebastian