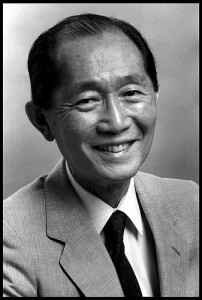 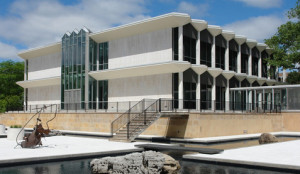 What do Wayne State University’s DeRoy Auditorium and McGregor Memorial Conference Center have in common with the original World Trade Center, the Federal Science Pavilion at the 1962 Seattle World’s Fair, and the air terminal in Dharan, Saudi Arabia?

Yamasaki. These structures were designed by Yamasaki & Associates, one of the world’s notable architectural firms, which was headquartered in Troy between 1955 and 2010.

Minoru Yamasaki, the son of Japanese parents who immigrated to the United States, was born in Seattle, Washington in 1912. He worked his way through the architecture program at the University of Washington as a summer laborer in Alaskan canneries. He earned a master’s degree at New York University and worked in the city until 1945. He was able to house his parents there, with his family, when many Japanese-Americans were interned during World War II.

He was recruited by a major Detroit architectural firm – Smith, Hinchman & Gryllis (now known as the Smith Group) – as chief designer, in 1945. At that time, many of the residential areas surrounding the city had covenants that prevented Japanese-Americans from owning or renting property. This was not true in Troy, and Yamasaki bought a small farm in the township and lived there with his family for 25 years.

Yamasaki left the firm to form a partnership with two colleagues in 1949. He was stricken by stomach cancer in 1954, and after convalescing in Michigan, in 1955 he and one of his partners, Joseph Leinweber, formed a new firm, Yamasaki & Associates, with their office in Troy.

From this office came the designs for the buildings mentioned above and many more. Yamasaki’s autobiography, A Life in Architecture, was published in 1979. Minoru Yamasaki continued to work until age 73, when he died from stomach cancer on February 7, 1986.