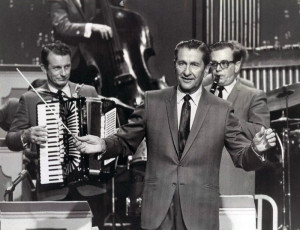 On July 2, 1955 The Lawrence Welk Show debuted nationally on ABC. For the next 27 ½ years the weekly show featured light band music, vocalists, dancers, and instrumental solos against a backdrop of “champagne” bubbles. Regulars on the show included singers Joe Feeney, Norma Zimmer, and the Lennon Sisters, honky-tonk pianist Jo Ann Castle, clarinetist Pete Fountain, and Myron Floren on the accordion. Welk routinely soloed on his accordion, and oftentimes danced with ladies from the audience.

The conservative Welk was obsessive about providing wholesome entertainment. His orchestra played “standards,” and he held his “musical family” to a strict code of behavior and fired those who did not adhere to his sense of morality. The show was very popular, especially among seniors, and helped launch the careers of a number of featured performers. When ABC finally cancelled the program in 1971, Welk formed his own production company and continued to air Memories with Lawrence Welk on local stations. The syndicated version of the program aired until 1982. Later some PBS stations repeated old episodes interspersed with interviews with the original performers.

Although Lawrence Welk was born and raised in Strasburg North Dakota, he spoke with a distinctive accent. Raising his baton, he’d always set the tempo with, “A ona and a twoa. . .” then concluded each musical performance with his signature, “Wunnerful, wunnerful.”

Trivia question: Name some of the sponsors of the Lawrence Welk Show. See tomorrow’s 365 Story for the list.