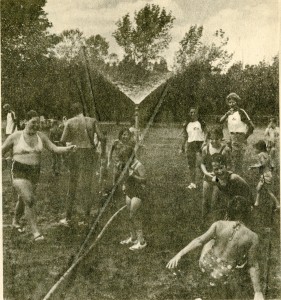 Many Troy youngsters participated in a free Parks and Recreation playground program during the summer of 1978. The seven-week event was held at 12 locations including City parks, school playgrounds, and the Stoneridge Subdivision’s “North Park.” Stoneridge Homeowners Association permitted the City to use the private 11-acre area free of charge.

Boys and girls enjoyed fun-filled days playing chess, checkers, and active games like foursquare, kickball, basketball, and tee ball. They made in crafts, wove macramé, painted plaques, and competed in contests ranging from watermelon eating to Frisbee and water balloon toss. Many kids also competed in a bake-off.

One hit of the summer was the pet show.  At Hill Elementary playground, leader Mary Haezebrouck observed “Besides your regular pets like dogs, cats and rabbits, we had kids bring grasshoppers, worms and even an ant farm that a boy just collected that morning.”

Photo: Kids cool off under sprinklers at playground program