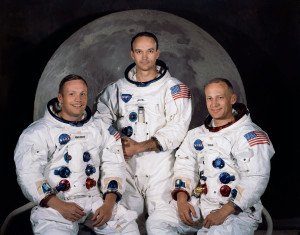 “I believe this nation should commit itself to achieving the goal, before this decade is out, of landing a man on the moon and returning him safely to Earth.”

Eight years later, on July 20, 1969 at 10:56 pm EDT, Neil Armstrong stepped out of the Apollo 11 Lunar Landing Module onto the surface of the moon and proclaimed, “That’s one small step for man, one giant leap for mankind.”

Fellow astronaut Edwin “Buzz” Aldrin Jr. joined him less than an hour later to explore the lunar surface, take photographs, collect samples, and conduct a few scientific tests.  They also planted a U.S. flag in the gray dust and left a plaque with the inscription, “Here men from the planet Earth first set foot on the moon–July 1969 A.D–We came in peace for all mankind.” After speaking with President Richard M. Nixon via Houston, Armstrong and Aldrin returned to the lunar module to sleep before lifting off at 1:54 pm on July 21 to dock with the Apollo 11 spacecraft piloted by astronaut Mike Collins. The three astronauts splashed down in the Pacific Ocean at 12:51 p.m. on July 24.

NASA completed five other successful lunar landing missions. The famous aborted Apollo 13 mission reached lunar orbit but did not land. Apollo 17 astronauts Eugene Cernan and Harrison Schmitt were the last Americans to walk on the moon. They left the lunar surface on December 14, 1972.

The work of some 400,000 scientists, engineers, technicians, and astronauts contributed to the Apollo space program.  Their skill, determination, and courage opened the universe to mankind.