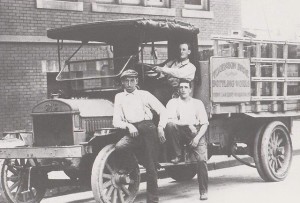 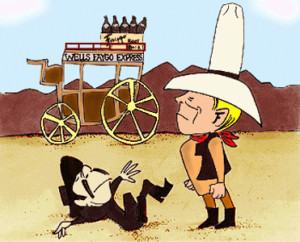 Ben and Perry Feigenson left Russia and settled in Detroit.  They were trained as bakers, but they would earn fame by making soft drinks.  In 1907 the brothers started bottling lager beer, mineral water, and soda water. Taking a chance, they flavored the soda water to create grape, strawberry, and fruit punch soft drinks. The flavors were based on their cake frosting recipe. They charged three cents for one bottle and five cents for two bottles of soda.

The name, Feigenson Brothers Company would not fit on their label, so in 1920 they changed the name to “Faygo.” In 1922, Ben and Perry purchased their first delivery truck and offered home deliveries in 1923.  They may have coined the term “pop” as their carbonated beverages made a distinctive noise when the cap was popped off.  As the business expanded, they moved their bottling plant to Gratiot Avenue.  The Brothers ran the company until the mid-1940s when the next generation took over. In the 1950s Faygo was sold only in Detroit and Michigan because it had a limited shelf life. At that time, chemists determined that impurities in the water prevented the pop from staying carbonated. A new water filtration system was installed, improving shelf life to more than a year.

With the dawn of television, Faygo benefited from time on the small screen. The early 1950s ushered in advertising and the debut of animated characters. Faygo used the memorable tagline, “Remember Black Bart? Which way did he go? Which way did he go? He went for Faaaaygoooooo!” Another popular commercial, which ran from 1971-1977 featured the jingle “Remember When You Were a Kid”. The song alone sold over 70,000 copies!

In 1985, the Feigenson family sold Faygo Beverage Inc. to TreeSweet, which in turn sold it to National Beverage Company, owner of the Shasta soda pop brand.  Today, Faygo comes in over 30 flavors and is sold in many states east of the Mississippi River. The most popular Faygo flavor remains one of the Feigenson brothers’ earliest creations: Redpop.

Listen to the Jingle: