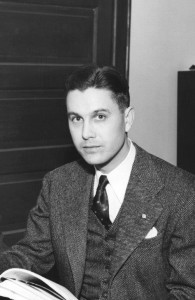 Judge Norman Barnard was a highly respected community leader in Troy and Oakland County for over fifty years. He was born on January 25, 1914 in Royal Oak, but his family moved to Troy Township when he was only four years old. Barnard graduated from Royal Oak (Dondero) High School in 1933 since there was no high school in Troy at that time. He then earned both a literary degree and a law degree from the University of Detroit.

Mr. Barnard was elected as Troy Township Justice of the Peace in 1938. Three years later he started his law practice and purchased a house he had admired since childhood. The distinctive house with three front doors was built in 1837 by Troy pioneer Johnson Niles. Norman married his sweetheart Harriet Kyser in their living room in 1941, and they resided in the home their entire married life. The couple had six children. The house was relocated to the Troy Historic Village in 2010.

Public service was the hallmark of Norman Barnard’s life. He was elected to the Board of Education, District #2, from 1943-1945; worked as the Township Clerk from 1945-1951; and in 1951 he was elected Township Supervisor. During Troy’s transition from township to city governance, Barnard served as the Chairman of the Charter Commission. When the residents approved the Charter in 1955, he was appointed the first City Manager of Troy. Barnard ended his professional career as a highly respected Oakland County Probate Judge, a position he held from 1963- 1989.

Norman Barnard was also a life-long volunteer. He was a firefighter for Station 2 of the Troy Fire Department and served on the boards of numerous organizations including the Troy Historical Society; Michigan Council of Probate and Juvenile Court Judges; Northridge District of the Boy Scouts of America; Oakland County 4-H Clubs; Troy First United Methodist Church; Oakland Inter-Agency Council on Alcoholism; Camp Oakland; Pontiac Area Urban League; and United Community Services. Judge Barnard passed away on July 15, 1998 at age 84.