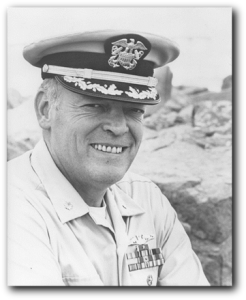 On January 23, 1968, Americans learned that the USS Pueblo, a lightly armed Navy surveillance vessel, had been attacked by North Korea. One American sailor was killed and the remaining 82 crew members, including Commander Lloyd “Pete” Bucher, were taken prisoner. Communist North Korea accused the crew of spying in their territorial waters. According to the US Navy, the Pueblo was 16 miles from shore, in international waters.

While the United States demanded the crew’s release, and increased its military presence in the region, the armed forces were also engaged in the Tet Offensive in Vietnam at this time. There was no immediate effort to obtain the crew’s release. During the next 11 months Bucher and his crew were beaten, abused, and forced to sign confessions or face torture and death. Commander Bucher’s wife Rose and the families and friends of other crew members mounted a “Remember the Pueblo Campaign”. They issued press releases, appeared on television, gave speeches, and pressured the federal government to obtain the release of the crew.

Finally, in December 23, 1968 the United States and North Korea negotiated an agreement. The United States admitted that the Pueblo had trespassed into North Korean territory, apologized, and pledged that there would be no future intrusion.  The men were bussed to the “Bridge of No Return” at Panmunjon and Commander Bucher led his men one by one across the bridge to freedom in South Korea.

A Naval Court of Inquiry severely criticized Commander Bucher and threatened to court martial him for surrendering his ship and classified information to the North Koreans, but following hours of intense questioning, Navy Secretary John H. Chafee did not pursue the trial stating that the crew had suffered enough.

In 1989, the Pentagon gave “prisoner of war medals” to Bucher and the crew. Until then, the U.S. government maintained they were detainees rather than POWs because United States and North Korea were not at war.

Many of the crew, including Bucher suffered permanent physical and emotional problems as a result of the abuse they had endured. Lloyd Bucher died on January 28, 2004 at the age of 76.