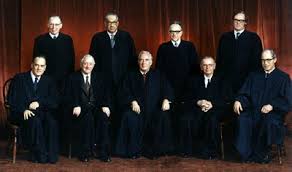 On January 22, 1973 the United States Supreme Court released one of the most widely recognized and heatedly contested rulings in its history, the decision in the case Roe v. Wade. The justices ruled 7 – 2 that a Texas state law banning the termination of pregnancy, except to save the life of the mother, violated women’s right to privacy, as protected by the Due Process Clause of the Fourteenth Amendment to the U.S. Constitution.

The case was filed as a class action suit on behalf of Norma L. McCorvey, a pregnant resident of Texas, where abortion was legal only to save the life of the pregnant woman. McCorvey’s attorneys filed the suit, under the pseudonym “Roe” to protect McCorvey’s privacy, against Henry B. Wade, District Attorney of Dallas County.

At the time that Roe was decided, termination of pregnancy was prohibited by law in most states, except to save the life of the pregnant woman or as a remedy in strictly limited cases, such as pregnancies involving fetal anomaly, rape or incest. Roe struck down those laws, but, in the intervening three decades, the Court has upheld a wide variety of federal and state legislation limiting the legal termination of pregnancy.