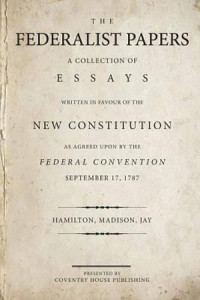 “Are we capable of establishing good government?” Alexander Hamilton

Between 1787 and 1788 James Madison, Alexander Hamilton, and John Jay penned 85 essays that supported ratification of the U.S. Constitution.  Most were published in The Independent Journal and The New York Packet. All of the essays were included in a two-volume set entitled The Federalist or The New Constitution. In the “General Introduction” of Volume I Alexander Hamilton wrote:

It has been frequently remarked, that … the people of this country, by their conduct and example, [to] decide the important question, whether societies of men are really capable or not, of establishing good government from reflection and choice, or whether they are forever destined to depend, for their political constitutions, on accident and force.

Many would suggest that we still grapple with this issue today. We ask, “What should be the role of government? When is government “good”? What are the roles and the rights of an individual as we establish government?” When is it appropriate for us to change basic governance and the responsibilities vested in local, state, or federally elected or appointed officials?

On September 25th the Troy Historical Society will welcome back Dr. Christopher Phillips as the guest facilitator of the first Constitution Café in our new yearlong series. The group will discuss “Can the Constitution guarantee good government?” Café participants will explore this question using the Socratic Method of inquiry and respectful engaged discussion to enlighten all rather than prove or disprove any one position.

Constitution Cafés are made possible by a generous grant from the Oakland County Bar Foundation and are free to attend but advance registration (call 248-524-3570) is encouraged. We particularly encourage students taking Government and American History to attend. Your voices are welcomed.