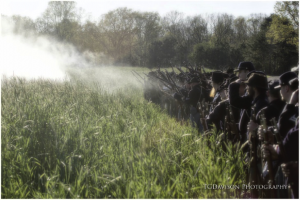 A message from the Front…

The Civil War reenacting season started off with a bang this year….lots of them actually; it usually does. This past weekend marks the 155th anniversary of the battle of Shiloh. Despite a 700 mile drive to Tennessee, I was not about to miss taking part in the reenactment.

On April 6th, 1862, the Union’s Army of the Tennessee, led by U.S. Grant and William T. Sherman, was greeted with an unexpected surprise—about 40,000 Confederate soldiers, comprising the Army of the Mississippi, under the capable command of Sidney Johnston. The Union high command did not believe that Johnston had the men or the will to attack. They were wrong. The disorganized Union forces were hit hard, and were nearly pushed back into the Tennessee River. Nightfall saved them.

That evening, Sherman went looking for Grant and found him resting under a tree, outside of camp. “Well, we’ve had the Devils own day haven’t we?” Sherman asked him, “Yes,” replied Grant, “lick ‘em tomorrow though.” And lick ‘em they did, but the cost was high. When all was said and done, the casualties topped 23,000, North and South. The nation was shocked. By some estimates those two days in April ’62 exceeded the American cost of the entire Revolutionary War.

I was particularly looking forward to reenacting this battle for two reasons. First: I’m a big fan of both Sherman and Grant, and this was a significant moment for both of them. Second: the unit I portray- the 15th Michigan, Company B—was actually there, and showed their dedication. They were deployed from Pittsburgh Landing onto the extreme left of the Union line….without ammunition. They had not had time to acquire any in the chaos, but marched out anyway, determined to meet the Confederate soldiers with bayonets. After enduring several Confederate volleys, they were ordered back, but returned later in the day with ammunition and continued to serve with “conspicuous gallantry”. Its moments like these that make me proud to be part of a tradition that honors and remembers the men who so believed in a cause, and in their honor, that they would risk their lives in such a fashion, just to protect what they hold dear.