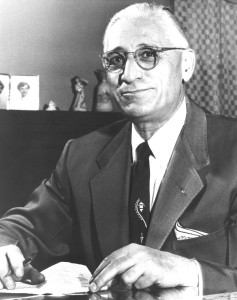 Frank Costello was the quintessential public servant. A charter member of the Troy Volunteer Fire Department, Costello served on the Board of Education from 1949-1956. When the township voted to incorporate as a home-rule city in June 1955, he was elected to the Charter Commission. On December 12, 1955, Troy citizens voted again to approve the charter, elect the first City Commission, and select Costello as the first mayor.

At that time, Mayor Costello was still the president of the school board. He was one of the few Oakland County officials to hold both offices simultaneously. He remained on the school board until the end of his term in 1956. Family friend Bertha Trost later revealed that Costello donated to the local churches and schools all compensation he received as a public official.

When Costello retired from public service he remarked, “I don’t know what I’ll do with the free evenings. I won’t know how to act.”