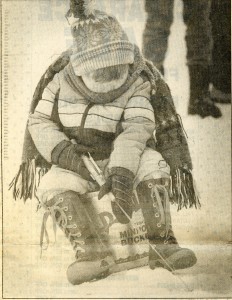 Over 600 kids came out for the Troy Ice Fishing Derby on February 2, 1985. As the temperature was a brisk two 2 degrees Fahrenheit, the youngsters spent more time staying warm than catching fish. The event had been originally scheduled on January 19th, but was delayed because of cold weather.

Three of the nine Derbies held between 1977 and 1988 were cancelled or rescheduled because the weather was too cold or too warm. The icy conditions in 1985 resulted in a smaller turnout. Dennis Sikowski, tournament director and a member of the Optimist Club, said “. . . We had about 650 (kids). Normally it (enrollment) goes over 1,000.” In preparation for the day of ice fishing, the Optimists and their co-sponsors, the Troy Rotary Club and the Troy Parks and Recreation Department, had stocked Sylvan Glen Lake with over 1,000 rainbow trout measuring 10 to 14 inches in length. But the largest fish caught that day was not one of the trout. Top honors went to a native two-pound largemouth bass.