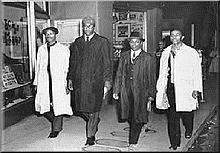 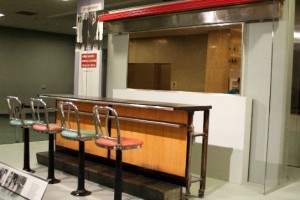 Counter and seats from the Greensboro Woolworth’s, now located in the International Civil Rights Center and Museum.

On February 1, 1960, a non-violent protest against racial segregation in Greensboro, North Carolina, sparked a series of protests which spread to cities across the state and then to other Southern states. These non-violent protests highlighted the restrictions facing African-Americans in the South and contributed to the decline of segregation in the Southern states, thus making a crucial contribution to the Civil Rights Movement.

Four African-American students from North Carolina Agricultural and Technical University, Greensboro, sat down at the lunch counter at the Woolworth’s store at 132 South Elm Street, Greensboro. Although they had been able to purchase various items in the store from a desegregated sales counter, they were refused service at the lunch counter, which was restricted to white patrons only. The four students, David Richmond, Joseph McNeil, Franklin McCain, and Ezell Blair, Jr. (later known as Jibreel Khazan), were asked to leave by the store manager, but they continued to sit at the counter until the store closed.

The following day more than 20 students joined the four men, who were later known as the A&T Four or Greensboro Four. Among the protesters were female students from Bennett College. The next day the number of protesters swelled to 60, on the fourth day to 300, and the sit-in spread to Greensboro’s S. H. Kress store.

The protests gained momentum, and within a week students from other North Carolina towns staged their own non-violent sit-ins. After an extended boycott of stores with segregated lunch counters, and a loss of almost $200 000 for Woolworth’s, the Greensboro store lunch counter was desegregated on July 25, 1960. It took another 5 years before Woolworth’s lunch counters in some other towns were desegregated.