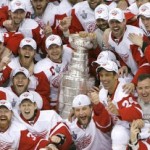 The 1994-1995 NHL regular season didn’t begin until January because of a lockout by the owners. The Wings won the Presidents’ Trophy in the shortened season and advanced to the Stanley Cup Finals for the first time since 1966, losing to the New Jersey Devils in the Cup Finals.

The following season, the team’s 62 victories broke the NHL record for the most wins in a season. That season Larionov, Fedorov, Kozlov, Konstantinov and Fetisov formed the “Russian Five” – the first all-Russian five-man unit in NHL history. The 1996 Conference Finals playoff series began the fierce rivalry between the Red Wings and the Colorado Avalanche. In Game 6 Claude Lemieux smashed the Wing’s Kris Draper into the boards from behind, causing him serious, long-term facial injuries.

On March 26, 1997, Darren McCarty repaid Lemieux for his hit on Draper. The ensuing on-ice brawl featured a center ice fistfight between the teams’ goalies. The Wings came back from a two-goal deficit to a 6-5 overtime victory, with McCarty scoring the winning goal. Detroit defeated the Avalanche in six games and swept the Philadelphia Flyers in the Finals, bringing Detroit hockey fans their first Stanley Cup in 42 years.

Joy turned to grief six days later when Konstantinov and team masseur Sergei Mnatsakanov were critically injured when a limousine carrying celebrating team members crashed.  In 1998, thoughts of their injured teammates drove the team to the Stanley Cup for the second consecutive year.

In 2002, after acquiring Dominik Hasek, Brett Hull and Luc Robitaille, the Wings won the franchise’s 10th Stanley Cup, defeating the Carolina Hurricanes in five games. Scotty Bowman stepped down, retiring after nine seasons behind the Red Wings bench, with nine Stanley Cups as a head coach, an NHL record.

In 2007-2008, the Red Wings posted their third straight season of 50 or more wins. The team captured eight individual and team trophies: the Stanley Cup; the Presidents’ Trophy; the Clarence Campbell Bowl (as Conference champions); the Conn Smythe (Zetterberg); the Selke Trophy and Lady Byng Trophy (Datsyuk); the Norris Trophy (Lidstrom); and the Jennings Trophy (team goals against), shared by Chris Osgood and Dominik Hasek. Gordie Howe was also honored with the NHL Lifetime Achievement Award.

The 2010–11Detroit Red Wings season saw the Red Wings equal the 1966to 1985Dallas Cowboys in second place for the most consecutive winning seasons in major North American professional sports.

The 2011–12, for the first time since 1990–91 season, the Red Wings did not finish first or second in the division, finishing third. The Red Wings also experienced their earliest playoff exit since 2006, losing to the Nashville Predators in five first-round games.

In the 2013-2014 season, the Red Wings set a franchise record for man-games lost due to injury or illness, losing 421 man-games. Nine players made their NHL debuts with the Red Wings during this season, their highest total since 1990–91. The season brought several franchise milestones: 3,000th home game; 3,000th road game; and 6,000th game and, at its completion, the Red Wings ranked third in NHL history in wins. They lost to the Bruins in the first round of the Conference Playoffs.

On August 14, 2014, the Red Wings signed Executive Vice President and General Manager Ken Holland to a four-year contract extension through the end of the 2017–18 season.

The Red Wings hold the record for the most consecutive post-season appearances, with twenty-four (1991-2015).

The new season has started, and we can’t wait to see what new stories unfold – go Wings!