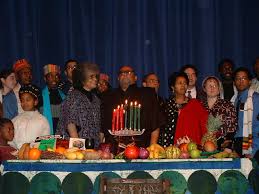 Yesterday’s 365 Story discussed the origin and seven principles of Kwanzaa.  Today’s story examines the symbols used during the celebration. The stories were contributed by student intern Michael Niemiec.

Many symbols are associated with Kwanzaa.The Kikomebe Cha Umoja or “Unity Cup” is used for the Libation ceremony during the Karamu feast on the sixth day of Kwanzaa. Traditionally the cup is poured for the dead, whose souls still remain on the Earth. The eldest person in the family presents a cup that is filled with water, juice, or wine and acknowledges the four directions of the wind before the family drinks from the cup to promote unity.

The Mazao are fresh fruits, vegetables or crops that symbolize work. They also connect Kwanzaa to the year-end harvest festivals held in Africa for thousands of years.

The Kinara is the candleholder and the cornerstone of Kwanzaa.  The Mishumaa Saba are seven unique candles which are lit during the seven nights of Kwanzaa. The candles symbolize unique African ancestors, the Sun’s power, and the Seven Principles of Kwanzaa. There is one black candle plus 3 red and 3 green candles. The black candle promotes Umoja or unity; the three green candles represent Nia (purpose,) Ujima (collective work and responsibility,) and Imani (faith,) and are placed to the right of the Umoja candle. The 3 red candles represent Kujichagulia (self-determination,) Ujamaa (family,) and Kuumba (creativity,) and are placed to the left of the Umoja candle.

The focal point of Kwanzaa is the Karamu celebration that is held on December 31st.  During this festival, people enjoy traditional African food.

The main colors used in celebrating Kwanzaa are red, green and black. Marcus Garvey, who started the Black Nationalist Movement, brought these colors, which were important to Africa during ancient times and recognized them for their symbolism. Red symbolized blood that was shed during Africa’s fight for freedom.  Green represented the fertile land of Africa and black represented the color of the people.