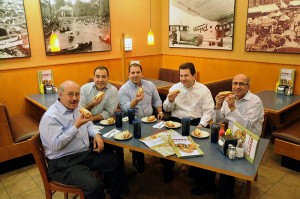 Coney Island restaurants are sprinkled like chopped onions all over southeast Michigan, but have you ever wondered how their signature item got its name? Katherine Yung and Joe Grimm, authors of Coney Detroit, explain that the area’s first Coney Dogs were created by Greek and Macedonian immigrants. When the newcomers passed through New York’s Ellis Island, these immigrants may have visited Coney Island, where Nathan Handwerker was already serving up his famous hot dogs. Perhaps, when they arrived in Detroit, they used the name to convey panache on their tube-steak treat. Many of these immigrants spoke little, if any, English. Making and selling Coney Dogs was something they could do right away, and they worked in restaurants, started new ones, and then brought other family members to Detroit.

In 1919, William and Constantine Keros (known as Bill and Gust) opened American Coney Island in Detroit. Their Coney Dog, a natural-casing hot dog topped with no-bean chili, chopped onions and yellow mustard, was the right food for the time, providing workers in the growing automotive plants a quick, hearty lunch. In 1936, a falling-out led Bill to move next-door and open Lafayette Coney Island, giving birth to a fierce rivalry that persists to this day. Other start-ups spread across Detroit, and, later, Coney Dogs accompanied the workers, as they moved from the city to the suburbs. Today, there are about 500 Coney Island Restaurants in and around Detroit, and Coneys are a signature food of the region.

Troy offers Coney aficionados a seat at the tables of two of the region’s leading chains, Kerby’s Koney Island and National Coney Island. National Coney Island was founded by James Giftos, who opened his first store at the Macomb Mall in Roseville, in 1965. National, which has been in business since 1965, currently owns and operates 20 restaurants in southeast Michigan. The chain, still headquartered in Roseville, also ships Coney Kits to transplanted Michiganders craving a taste of home.

Another of today’s most successful chains, Kerby’s Koney Island, is run by the extended Keros family.  Kerby’s Koney Island, with 24 locations in southeast Michigan, was honored as Michigan’s family restaurant of the year at the Michigan Food and Beverage Association’s 84th annual dinner on March 24, 2012.