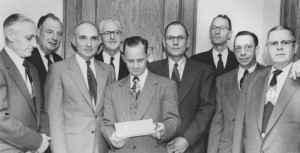 December 12, 1955 was an overcast day in southeast Michigan with light snow showers between noon and 4 pm. The temperature hovered around 28 degrees all day with 8-10 mile/hour winds from the west and northwest. Troy Township kids wearing snowsuits and mittens probably caught snowflakes on their tongues after school while their parents worked at home, in their barns, at stores, or local businesses. And on this ordinary Monday, 2,360 of the Township residents also voted. The ballot they cast included a proposal to approve the Charter for proposed City of Troy and the names of candidates who would serve as City Commissioners and as the mayor.

The final vote tally was 1,223 for and 1,137 against adoption of the Charter. The new City of Troy was established on an 86 vote margin. Frank Costello was elected mayor. The City Commissioners included Ernest Gray, George Ford, Elmer Lowe, Donald Lance, Justice of the Peace Charles Losey, and Associate Justice Ceville Mason. While there was cause for celebration, a tremendous amount of work remained before the new leadership. But those committed to establishing a home rule city had succeeded. The City of Troy was a reality.

The City of Tomorrow. . .Today, by Loraine Campbell