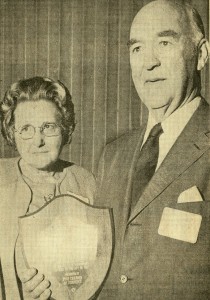 Vincent J. McAvoy who served as the Mayor of Troy from November 30, 1964- April 8, 1968, was born in Gouverneur, St. Lawrence County, New York, on May 31, 1904. As a young man, he worked in the mail room at the Watertown Daily times in the early 1920s and earned a degree in business administration from New York University. He married Dorothy Carter Oct 6, 1941 in Blessed Sacrament Church in Detroit and in 1945 he began his career at Higbie Manufacturing, Co. in Rochester Michigan. The firm made production steel pressure tubing for the auto industry.

The McAvoys moved to Troy Township in 1950 and Mr. McAvoy participated in the committee to incorporate the City in 1955. Four years later he was elected as a City Commissioner (now City Council.) He served as Mayor from 1964 to 1968.

Mr. McAvoy was a truly civic-minded citizen. He was one of the original organizers of Troy Little League baseball and football in 1953. He served two years on Troy Parks and Recreation Board, six years on the Oakland County Child Guidance Board, and three years on the Oakland County Board of Supervisors. He was the chairman of the Supervisors’ Road Commission, Personnel and Policies Committee and the Building and Grounds Committee. Following his retirement as the Vice President of Higbie Manufacturing in 1966, he became active in SCORE, a group of retired business executives, which assists small businesses.  McAvoy also fundraised for the Detroit Council of Boy Scouts and helped organize the Troy Chamber of Commerce.

On November 4, 1971 former Mayor McAvoy was named the City’s Distinguished Citizen of the year at a dinner dance held at the Clawson-Troy Elks Club.

Vincent and Dorothy Mc Avoy made their retirement home first in Florida and later in Charlotte North, Carolina. Mr. McAvoy passed away on December 30, 1992 following a heart attack. He is buried at White Chapel Cemetery.