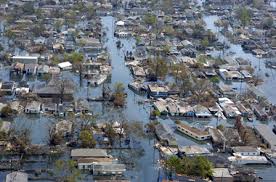 Television and instant communication via satellites and the internet bring world events into people’s homes. War, terrorist acts, and natural disasters are now witnessed in real time by millions across our country and around the world. A poignant example was the devastation caused by Hurricane Katrina beginning August 29, 2005.

The National Weather Service first reported a tropical depression over the Bahamas on August 23. Weather Channel meteorologists tracked the system. As the storm formed the World Meteorological Organization named it Katrina following their protocol and Americans quickly associated the name with the storm.

On August 28 Gulf Coast residents were advised to evacuate their homes through emergency television and radio broadcasts. Mayor Ray Nagin of New Orleans issued a mandatory evacuation order for his city’s residents. He also identified the Superdome as a shelter for those who could not get out of the city, as over twenty percent of the residents did not have cars. Eighty percent of the population evacuated, approximately 10,000 went to the Superdome, and many thousands took shelter in their homes. Katrina was now national news.

After hours of heavy rain, Hurricane Katrina hit southeast Louisiana as a Category 3 storm on August 29 at 6 AM. The storm surge collapsed deteriorated levees and within hours nearly eighty percent of the city was flooded.

The brutal force of the storm, the loss of human life, and the desperation of people clinging to rooftops or begging for help from the ill-equipped Superdome were all broadcast on TV and the internet. The media also reported the slow and inadequate response of the Federal Emergency Management Agency (FEMA.) Images and commentaries were repeated as statistics were compiled and reported: nearly 2,000 people killed, over 100,000 homes destroyed, 90,000 square miles of the United States affected.

Ten years later Hurricane Katrina remains a vivid memory across the United States and the city of New Orleans continues to rebuild.