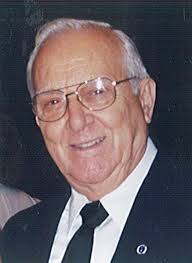 Anthony “Tony” Pallotta was the City of Troy’s longest serving Councilman, having held the position for 31 years. That distinction won him great respect and the title “godfather of the City.”

Like many of his generation, Tony was a World War II Veteran, having served in both the U.S. Coast Guard and U.S. Navy. When he returned to civilian life, Tony opened a TV Repair shop, married his best girl Marilyn, and raised three children in Troy. His son Steve (Troy’s Building Operations Director) recalled that despite his father’s work and Council commitments, his dad was always there for his family and was the most loving man he knew. Following his retirement, Tony devoted his time as a “Red Coat” at Troy Beaumont Hospital, where he contributed 2,000 hours of volunteer service in the Emergency Center.

In 2005 Tony was recognized as Troy’s Distinguished Citizen. Many were on hand at the awards banquet to praise his honesty and hard work. Oakland County Commissioner Charles Palmer said, “It comes to mind that if anyone could be a role model (for elected officials), it would be Tony Pallotta.” Then Mayor Louise Schilling added that Pallotta was instrumental in the development of all of the city buildings.

At the conclusion of the event Tony explained his dedication to service in his typical straightforward style, “I was born in Brooklyn. I was told by both of my parents to do the best you can to make the world better. . . That’s what I’ve tried to do most of my life.”

Tony Pallotta passed away on February 24th in Troy’s 60th anniversary year at the age of 87.