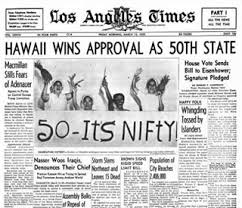 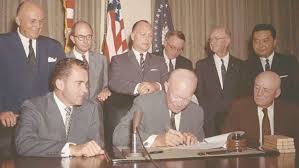 Just four years after Troy Township voted 9 to 1 in favor of becoming a home rule city, the citizens of the U.S. Territory of Hawaii voted by a wide margin to become a state. Their affirmation was the final step in the legal process to admit Hawaii as the 50th state in the Union.

The formal ceremony at the White House occurred on August 21, 1959. President Dwight D. Eisenhower presided, seated at a long table with his Vice President, Richard Nixon, and Speaker of the House Sam Rayburn. Behind them stood congressmen-elect from the new state. President Eisenhower noted that this was a truly historic occasion, as two new states had been admitted in the Union during one year. The President also issued an Executive Order for a new American flag with 50 stars to be designed. The new flag was unfurled on July 4, 1960.

Originally settled by Polynesians in the eighth century, the Hawaiian Islands attracted American traders in the 1700s. In the 1800s Americans established sugar plantations and missionaries on the islands and during the 1900s pushed the natives to adopt a constitutional monarchy. Then, in 1893, the Americans help depose Queen Liliuokalani, who wished to reinstate a ruling monarchy. As early as the Spanish-American War, the United States realized the strategic value of having a naval base at Pearl Harbor, and the process of formal annexation by the United States began.