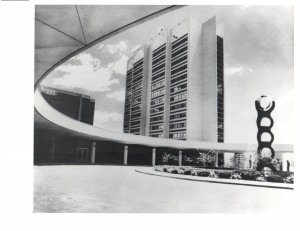 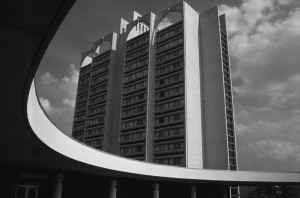 The Somerset opened in March 1973 and has been renovated four times. This picture of the original facade shows the fountain that faced west and was known to blow a few drops of water on guests when it was windy.

Entrepreneur Sam Frankel had a vision for Troy, particularly the area between Maple and Big Beaver abutting Coolidge Highway. He would almost single-handedly turn Big Beaver into Troy’s Golden Corridor. First came the Somerset Apartments, completed in 1969; he next enticed Saks Fifth Avenue to Troy in 1968 and in 1969 attached Somerset Mall (now Somerset Collection South) to Saks.

Perhaps a hotel would be a nice addition to Big Beaver. The Somerset Inn was opened in March 1973. If you lived here or visited in those days, you might remember there was a movie theater attached to the hotel, which would be replaced by Vic Tanny’s. When they left, the hotel just expanded into their space.

“It was one of the few hotels here in the metro area back in the ’70s, indicates Somerset Inn General Manager Duane Swanson. In our area there was the Kingsley Inn, the Northfield Hilton and, the Troy Hilton. While the metro area had 13,000 rooms, Swanson notes that only 900 of them were in Troy. Today the metro area has over 42,000 rooms for visitors.

Stanley Frankel, president today of Frankel Associates, the company his father founded, observed, “Our specialty is people who have something to do.”

Whether it’s business or pleasure, Somerset Inn is ready to serve the public’s needs. In fact, Somerset Inn is a favorite with Troy’s business community. Looking for professional service and close attention to detail for your next Detroit area wedding, meeting, seminar, banquet, or conference? You’ll find it at the Somerset Inn.

The recently renovated meeting spaces in the hotel has a fresh, sophisticated look and design by Caryn Slatovsky of Alexander Bogaersts. Somerset Grand Ballroom is a beautiful, soaring 7,200 square foot facility that can accommodate up to 500 people for the grandest of corporate meetings or social events. The ballroom features an incredible 3,000 sq. ft. foyer, large enough for pre-function activities and special displays – even car exhibits.

Somerset Inn boasts a total of 17 meeting rooms – large and small – for breakout sessions, executive conferences, corporate business meetings or large conventions, not to mention birthdays, promotions, or an anniversary gathering. All these rooms offer the latest in audio/visual equipment, as well as specialized catering and a wealth of other services.

The 250 guest rooms are pretty awesome, too, featuring a long list of free amenities. There are the first floor garden rooms that overlook the garden courtyard – once a swimming pool – and now the perfect site for a wedding or summer corporate gathering.

Perhaps that is why everyone from Michael Jackson to Presidents Gerald Ford and George W. Bush (who requested a cigar ashtray and a vanilla candle) made stops here. In 2008, Clint Eastwood and the gang from “Gran Torino” called Somerset Inn home for three months. They took 110 rooms and office space next door in Somerset Place.

And come the holidays, you might be one of those who takes advantage of a shopping package, so you can hit the Somerset Collection, but still have a very nice place to eat and rest after your adventure in Troy.