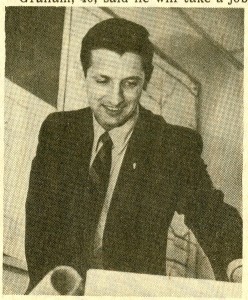 Richard Graham, the City of Troy’s first in house Engineer, provided the current City Engineer, Steve VanDette, with a detailed history of the work completed by the department as the City was developed. Below is an excerpt of that document that highlights the first plans for road improvements. Mr. Graham was appointed the DPW Director in 1968.

The 365 Project Editor would like to note that the original water pipes in the basement of the 1927 Township Hall were replaced in 2015. The new insulated pipes don’t drip and the jail cell is still intact.

Prior to September 1966, the Engineering Department was housed in the basement of the Township Hall Building (now the offices of the Troy Historic Village). Survey stakes were stored in the jail cell. We had 2 rooms and 4 employees in 1964. We had to be careful where we placed drafting boards and stored plans because the water pipes overhead sweated and dripped.

Development out-paced major road funding (so what’s new?). The mostly 2-lane major roads were experiencing very high accident rates at major intersections. Our request for a Master Thoroughfare Plan was turned down in the 1965 budget . . . so we recommended, and the City Commission approved, a temporary ban on development and rezoning along Big Beaver (Somerset Apartments were under construction at this time.)

We did an in-house analysis to identify the most critical intersections and funded improvements on both City and County intersection widening to substantially reduce accident rates.

After a Master Thoroughfare Plan was authorized (1968 ±) and approved (1970 ±) Engineering developed priorities for road improvements, with projected costs. A 1973 2 mil tax was approved by Troy citizens and using these funds, we garnered additional State and Federal monies for road improvements. Recognizing that rights-of-way acquisition would be key to the success of our road construction as well as water and sewer construction, a staff was assembled to carry out those responsibilities.