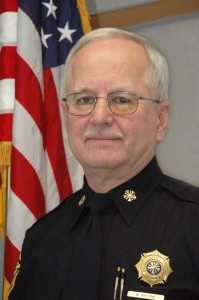 A native of Chicago, Bill Nelson moved to Troy in April 1975 following four years of active duty in the U.S. Air Force as a firefighter and medic. He was attracted to the vitality of the progressive young city and its volunteer fire department. Between April and October 1975 Bill worked as a volunteer at Station 3, a paid firefighter in Madison Heights, and a firefighter in the Air Force Reserves. In October 1975 he was hired to fill the fire marshal position vacated when Jim Halsey was promoted to chief.

In 1994 following 19 years as Troy’s fire marshal, Bill Nelson was selected as Jim Halsey’s successor. Chief Nelson has addressed two significant challenges. He has worked to unify the six stations into a cohesive department where all of the volunteers follow the same policies and procedures. He has also continued to recruit new members to fill the roster of up to 180 active volunteer firefighters. The department also employs 10 career staff members.

Chief Nelson continues to maintain the Troy Fire Department’s excellent rating as the largest volunteer/combination fire department in the state and one of the fifteen largest volunteer units in the nation.