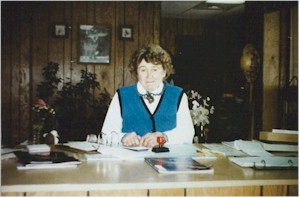 Many people are familiar with the Troy-Oakland Airport located between Crooks and Coolidge, south of maple Road. There was another airport in Troy for many years– the Big Beaver Airport. This airport was established on 140 acres of land at Big Beaver and John R.

The land was owned by the Johnny B. main family who purchased the farm land in 1940. John main’s children, Johnny and Anna, were interested in airplanes since childhood. They were both issued an operating license in 1945 when they registered the airport under the GI Bill. Both Anna and Johnny took flying lessons and received their private and commercial licenses by 1947. Over the years they were able to enlarge the airstrip. By the 190s the main airstrip was converted from sod to asphalt and another sod runway was added.

The City of Troy constantly tried to close the airfield until an agreement was reached with Anna main. Ms. Main, who by this time had no surviving relatives, was allowed to maintain the airport until she died on April 24, 1996 at the age of 79.