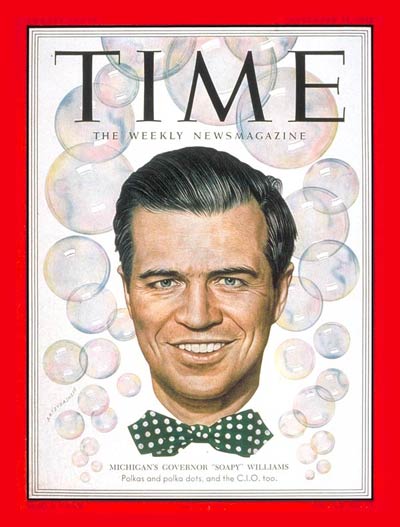 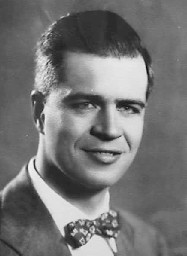 G. Mennen Williams, Michigan’s popular governor from 1948- 1960, is remembered for his impressive public service as well as his polka dot tie and nickname. Born on February 23, 1911, Gerhard Mennen Williams was named for his grandfather Gerhard Heinrich Mennen. He acquired the nickname Soapy because Grandpa’s company manufactured toiletries and talcum powder. Many of us still use Mennen products including shaving cream, Speed Stick deodorant, and Baby Magic.

Mennen enjoyed a privileged youth, attending Salisbury School, an exclusive Episcopalian prep school in Connecticut, Princeton, and the University of Michigan Law School. He decided to pursue a career in public service while still at Salisbury and although raised in a staunch Republican family, he became a Democrat while at Princeton. Williams admired Franklin D. Roosevelt and advocated for social causes.

Upon his graduation from law school in 1936, Williams worked in Washington DC for the Social Security Board and then as Assistant Attorney General for Michigan Governor Frank Murphy. He enlisted in the Navy during World War II, earned 10 battle stars, and the rank of Lieutenant Commander.

In 1948, at the age of 37, Mennen mortgaged his house to fund his first gubernatorial campaign. His mother refused any financial support because he ran as a Democrat. With the support of his wife Nancy, labor unions, and dissident Republicans Willaims won the office in a upset victory. His brother Dick gave him a green bow tie with white polka dots as an inaugural gift. The tie quickly became Soapy’s trademark.

Governor Williams served six consecutive terms, gaining popularity and support through each term He relied heavily on consensus building through appointed commissions to advance programs and policies that he supported. Williams oversaw construction of the Mackinaw Bridge, strengthened the state’s higher education system, improved Michigan’s highways and protections for civil rights and mental health services. Governor Williams reviewed and approved the Charter for the City of Troy in 1955.

When he left the Governor’s office, Williams was appointed Secretary of State for African Affairs (1960-65) and then US Ambassador to the Philippians (1968-69). He was elected to the Michigan Supreme Court in 1970 and served as Chief Justice from 1983-1986.

G. Mennen Williams died following a cerebral hemorrhage on February 2, 1988. He is buried on Mackinaw Island.