You can read these posts in any order you like; if you haven’t read “Orlandos” in Civil War Michigan, part 1, you can find it here <insert link>

The Orlando from Civil War-era Michigan highlighted in this post is largely remembered todayfor hisresponseto an enemy communication and the battle that followed. Michigan has a Medal of Honor winning Orlando, too. A third is known for his contributions to Michigan’s engineering worksafter the end of the war. All those featured in our 3-part series of “Orlandos” in Civil War Michigan survived their service. 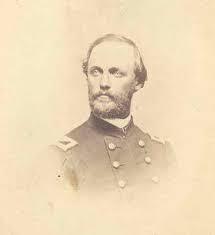 Orlando Moore
Only 16,367 men were members of the U.S. Army on the eve of the Civil War. Today, we refer to these men as “Army Regulars” to distinguish them from the hundreds of thousands of “Volunteers” that joined up for the conflict to come. 1st Lieutenant Orlando Hurley Moore was one of this group of Army Regulars. He stayed loyal to the Union, as did about 80% of the other officers serving at the time. In late December 1861, Moore first took an assignment with the 13th Michigan Infantry as Lieutenant Colonel but was offered leadership as Colonel of the 25th Michigan when it formed in Kalamazoo inAugust of 1862. ByDecember of 1862, the 25th had spent a month protecting and preparing earthwork defenses for a bridge over the Green River in Munfordville, Kentucky.

In April 1863, Moore and his men were tasked with provost and guard duty—essentially military occupation—in Louisville, Kentucky. Moore was not well-liked by some influential Louisville citizens and higher-ups in the U.S. Army decided to divide the 25th Michigan. Some men stayed in Louisville until August, but five companies commanded byCol. Orlando Moore were dispatched to protect roads and deal with Confederate “raiders.” These five companies went via Lebanon incentral Kentucky to protectanother bridge over the Green River near Campbellsville. Moore looked at the terrain, assessed the situation and applied lessons learned at Munfordville. Activity further south would hasten their preparations.

Moore vs. Morgan
Meanwhile on June 11, Confederate Brigadier General John Hunt Morgan left Sparta, Tennessee with about 2,500 mounted men. Morgan was known for raids using cavalry to attack quickly, inflict damage, and move on to fight another day. He and his men were now headed north into enemy territory to do just that.

Today, it is a short carride to travel 116miles from Sparta, Tennessee to the Green River at Tebb’s Bend, Kentucky. For Morgan’s cavalry, it took about three weeks (and more than200 miles) to make this journey via Campbellsville. Union scouts brought word to Colonel Moore that Morgan’s cavalry, much larger than Moore’s own five companies, would soon arrive at their Tebb’s Bend outpost. Taking advantage of natural bluffs and a bit of time, Moore ordered all 240 or so men of the 25th Michigan to dig in, make advance rifle pits, and to construct trenches and abatis (a defense of sharpened logs facing the enemy).

“I Cannot Entertain the Proposition to Surrender”
Arriving at Tebb’s Bend at sunrise on July 4, 1863, Morgan sent dismounted troops to flank the small garrison waiting behind their earthworks. The Southern troops made no real progress against this well-prepared defense, however. Under a flag of truce, the Confederate General next sent forth officers with a demand for surrender. Colonel Moore went forward in person to speak to the Confederate officers and replied:

Present my compliments to General Morgan, and say to him, that this being the 4th of July, I        cannot entertain the proposition to surrender.

Colonel Allison of Morgan’s staff tried to reason with Colonel Moore, but the stubborn Michigander would not reconsider. The parley ceased and Morgan’s troops renewed their attack. Behind fortifications, new Enfield rifles gave the sharpshooting 25th Michigan an advantage, especially when used to target artillery men and officers. Three and a half hours after the initial early morning attack, the Confederates again sent forth a flag of truce—this time to collect their 36 dead and 45 wounded. Thirty of them had been captured. Union losses totaled 6 dead and 14 injured. One of the Union wounded was discovered to be Lizzie Compton, a female soldier who had been removed from other regiments following the same revelation.

Morgan’s next target was Lebanon, Kentucky. He won that battle, but at the cost of the life of his brother, Thomas.Morgan would eventually be captured and escape.

For his service, Orlando H. Moore was awarded with brevet promotions and remembered for his refusal to surrender on a day as important to his countrymen as July the 4th, 1863. Battles concluding in Vicksburg and Gettysburg greatly overshadowed Tebb’s Bend, but on this holiday, an Orlando was there. 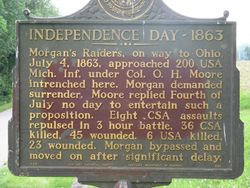